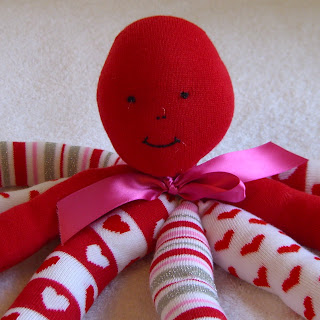 What seems like a lifetime time ago I made a Socktopus. I was lucky enough to have the tutorial published in CraftStylish magazine. CraftStylish (like so many magazines out there) has since ceased being published - but they continue to publish a whole host of projects and information online. 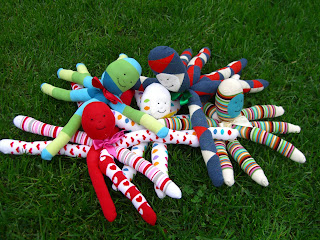 Here is a tutorial for the Socktopus. This cuddly, leggy and delightful Socktopus is easy to make and safe for all age groups.

Equipment
- Scissors
- Sewing needle
Note: You can hand stitch or use a machine for this project.

Prep Your Fabric
1. Turn all your socks inside out.

2. Choose which sock will be the head of your Socktopus. Cut the sock down the middle leaving 1/3 intact. This sock will make the head and 2 legs. 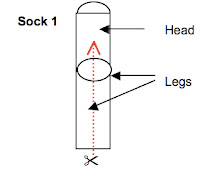 Sew and Stuff the Socktopus
3. Sew up each leg leaving a gap at the bottom of the head.
4. Turn the sock right side out and stuff the head and two legs and sew up the gap.
Note: Make sure the head has a nice round shape and the legs have enough stuffing in them and that they are stuffed evenly. Stuffing all your legs evenly will allow your Socktopus to stand up once you have finished! 5. Cut 1/4 off the bottom of each remaining sock and then cut down the middle. You now have an additional 6 legs. 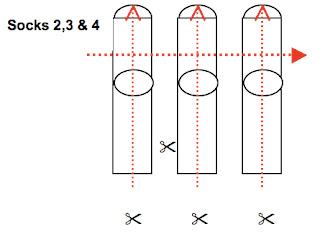 6. Sew down the long side of each leg. Turn right side out and stuff. Sew shut the opening at the top of each leg.
Note: if you have been using a sewing machine – you will probably want to hand stitch part 6. 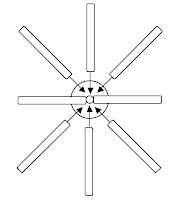 Adorn the Octopus
8. Embroider the face.
Note: If your socks have a very busy pattern you might want to sew a circle of felt to the head before embroidering the face.

9. To finish off tie a bow around the neck of your Socktopus.

This weekend we went to the New York Botanical Gardens to see the giant pumpkins. Pretty big eh? It weighs over 1000lbs!! 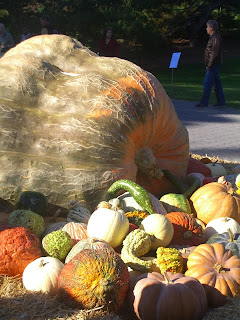 I have also been decorating our front porch for Halloween. Last year I went to Michaels (after Halloween) and stocked up on craft pumpkins that were on sale. This year I discovered that Target sells craft pumpkins too at an even better price point. All the pumpkins have been sitting in our basement waiting to be carved and recently I managed to carve a few for our porch. I have used a mixture of craft pumpkins and real pumpkins for our Halloween display this year and orange fairy lights rather than real candles. I hope our craft pumpkins will be used year after year after year. 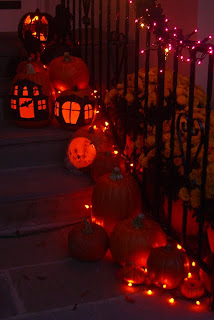 I like the way it looks - but I feel I need lots more pumpkins ... here is a closer look. 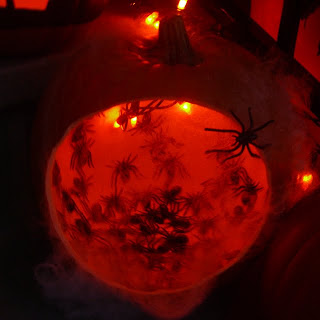 Above is a spiders nest - I used a pack of 100 plastic spiders on the inside of the pumpkin and a little bit of the fake spider web. The faces below are an idea from Martha Stewart Pumpkin and Carving Decorating ideas. Each pumpkin has a hole drilled in the back of it and I put about six fairy lights from the string into each pumpkin. 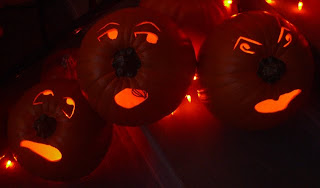 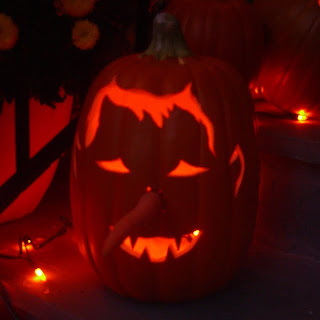 This chap my lovely sister carved for us when she was recently here on a visit - it is supposed to be a portrait of her boyfriend. I stuck a carrot in the pumpkins nose hole - but this is no comment on what I think of my sister's boyfriend - he is very nice! And below is another idea adapted from Martha Stewart. I added black paint to my pumpkin houses and I love them - I shall be making some more for next year - perhaps we will have a whole pumpkin village! 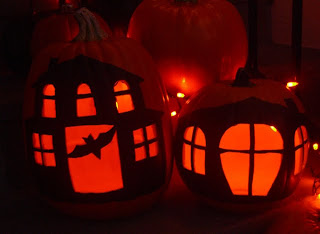 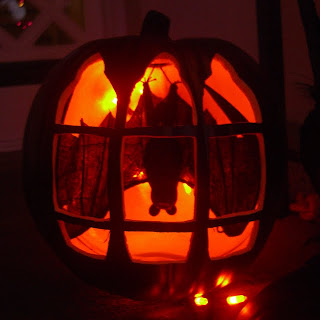 Above is another take on a Martha Stewart idea - but I used a black pumpkin and a bat rather than a vulture. I was a bit disappointed with the mouse house pumpkins below. Maybe too many mice? 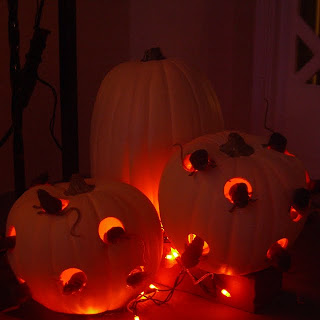 I love Halloween. Thanksgiving is my husband's favorite and luckily for him that is right around the corner too!
Posted by Unknown at 7:00 AM 4 comments:

A friend asked for some art smocks for her children made from laminated cotton. I haven't used laminated cotton before - but in our short acquaintance I have grown to love it - much less rigid than oil cloth and it can be washed and pressed easily. For this project I used Sugar & Spice Laminated Cotton (Riley Blake Designs) in Aqua and Red and the bias tape is made out of a plain red broadcloth. Little Bunny #1 was not at all compliant about wearing or being photographed for this post - I had hoped for adorable photos of her painting - her clothes being projected by my wonderful new garment ... unfortunately my little willful lady had other ideas. 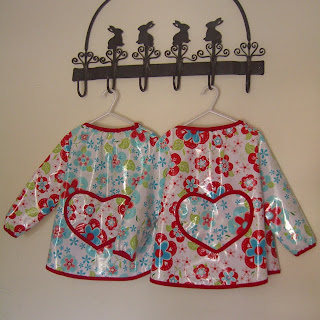 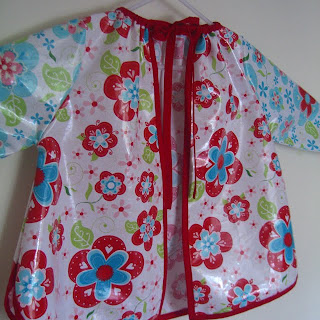 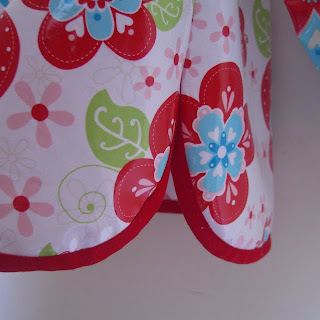 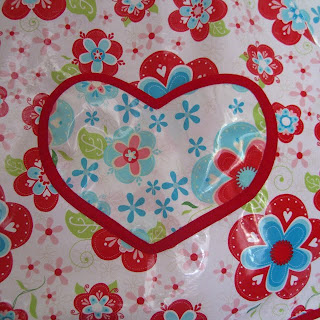 ... and a heart shaped pocket for little paintbrushes or other arty goodies.

Here are some sewing tips for laminated cotton from Pink Chalk Studios. And there are some great art smock tutorials out there to note from Don't look now! and Sew Mama Sew. I hope I will be able to post my own pattern with a tutorial soon - I feel there could be many variations on the art smock theme too ... just need to find that elusive free time free from children and not horizontal from exhaustion!
Posted by Unknown at 7:00 AM 3 comments:

Someone has suddenly discovered princesses and a lot of time is spent dressing up, making crowns and asking 'who wants to be a princess?' ... which made me think of this idea. 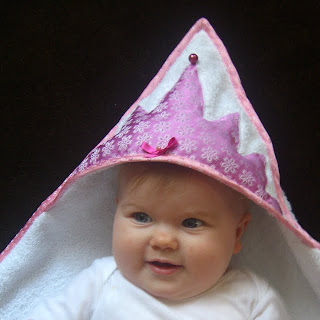 I used my Simple Baby Bath Towel pattern to make this cute little gift for a little baby who will be arriving very soon. I added a purple princess crown to the hood and padded it softly. 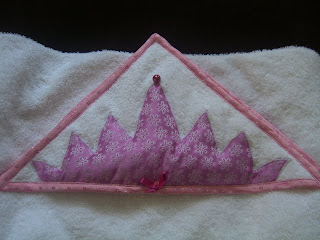 It is embellished with a bead or two and a small piece of ribbon. 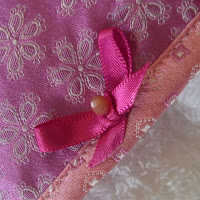 I used recycled silk ties for the crown and the bias tape. I think it is rather cute. I can see a 'prince' version being rather sweet too. 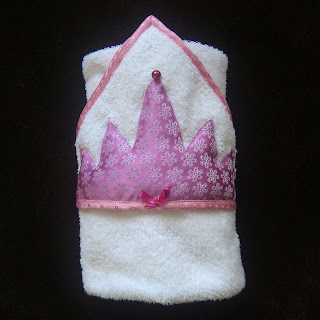